Expectation Vs. Reality – Returning to Education 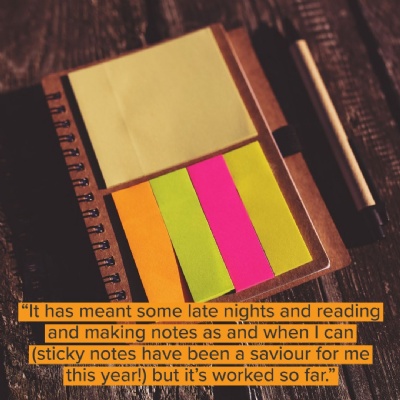 Well, in truth, the reality of doing this degree is that it’s been hard work, but I’m doing it.  I’ve achieved so much this year, things that I didn’t think I’d be able to do – I mean I actually got a B on an assignment (well B- but it’s still a B!!)

So, Expectation vs. Reality time...

Would I be able to apply?

Expectation – As a 30 something with no qualifications past GCSEs (and only a handful of those) would I even be able to apply to do a degree?  Would I be laughed at for even thinking about it?  Why would they accept me onto doing this degree when I’ve no experience with working with children other than my own.

Reality – It took me all I had to muster up the courage to attend an information session with Ginny.  Even on the way there I nearly turned around and drove home.  Once I got there, Ginny immediately put me at ease.  She explained that they have a lot of change of career or returning to work applicants that have a similar story to mine.  Ginny told me to have more of a look into the degrees, and to ring Caley with any questions.  It took a couple of weeks for me to ring Caley.  Once I did and explained my situation, she explained to me exactly what I needed to do, and what the process would likely be.  A UCAS application and a conversation with John (the degree leader) later I was offered a place.

How would I juggle a degree around family life?

Expectation – I would be at every session with a little one sat on my lap, not able to concentrate fully, and miss half of what I was being told.  I also wouldn’t be able to find the time to do any reading or studying.  I would be up the night before every assignment was due starting them and then finishing them off right before the cut-off time.  It would be impossible to do, and I would be failing and then drop out as I wouldn’t be able to do it.

Reality – With the help of my in-laws (I’m very lucky to have a good support system), my little one is spoiled rotten on a Tuesday and I get the time to do my session in peace and quiet.  Finding the time to do my study and to write assignments has been trickier and has taken some adjustment for the whole family, but with me being firm about when is my dedicated time to study and when I can put things down and just be ‘Mum’ has been key.  It has meant some late nights and reading and making notes as and when I can (sticky notes have been a saviour for me this year!) but it’s worked so far.  With the exception of the assignment due during the lockdown, I’ve managed to get all of my assignments done with time to spare, enough for them to be proofread and adjusted.  It turned out not to be impossible, I’m not failing and I’m still going, so all in all hard work, adjustments to life and the odd late night but it’s been great and nothing like my expectations.

How would I do this?

Expectation – I wouldn’t, I’d be out by Christmas.

Reality – The support I have received, from my family, the whole team at TLI, from my first information session to the admissions process, to studying, and most importantly the other students has been the one thing I have relied on to get me through this first year.  It’s been hard going in places but knowing that I’m not alone in this and that there is always someone to talk to about whatever the issue I might have had, has been the best part of doing this degree.

The reality of doing this degree has been so different from my initial expectations, it’s been worth every late night, every hurried teatime and every bit of stress and worry.